It is not unusual for a resident of the City of Radford to call upon Altizer Law, P.C., as his or her personal injury attorney. The New River City is also a place where members of our Team enjoy recreational activities. We appreciate the particular beauty of the City and we enjoy the area’s outdoor opportunities almost as much as we enjoy the people of Radford.

tlers from the valley through southwest Virginia and through the Cumberland Gap into Kentucky. As the trail was developed, it became Stagecoach Road, then Valley Pike, and finally U.S. 11. Radford’s section of this historic trail is called Rock Road.

It was in this section of the Wilderness Road that William Ingles and his wife Mary Draper Ingles settled in 1762 and established Ingles Ferry, which became the center of a thriving commercial center that offered a tavern, blacksmithing services, and a general store. Several accounts exist of Mary Draper Ingles’ and her two sons’ capture, along with several others from the community, by the Shawnee in 1755, during the French and Indian War, after the Draper’s Meadow Massacre. The captives were taken to a settlement at the Ohio and Scioto Rivers. After two-and-a-half months, she and another captive woman escaped and made their way back home – a journey of some 500-600 miles, following and crossing several rivers and creeks and crossing the Appalachian Mountains.

In 1854, Lovely Mount was chosen for construction of a Depot on the New Virginia and Tennessee Railroad because it was halfway between Bristol and Lynchburg. The depot was called Central, and in addition to the depot, a repair shop was also built. When the first trains ran two years later, the population of Central had more than tripled and it had become a vital commercial center and shipping point for local products (tobacco, bacon and lumber). The railroad carried products, including coal, coke, stone and iron. Mining and manufacturing interests soon developed and brought prosperity to the area.

In the 1930s the Federal Government chose Radford as the location of a “powder plant” or Arsenal, which was built in 1940-41 to manufacture gunpowder and related products. By the beginning of World

Today, visitors to the Wilderness Road can stop at the museums, living history interpretive villages, forts, historic downtown centers, schools, farms and galleries to learn about the early pioneers like Mary Draper Ingles, Daniel Boone, and others and experience the life they led. The Wilderness Road extends from slightly north of Winchester to the Cumberland Gap at the southwestern tip of Virginia. More than 130 stops and 23 communities are included on the Wilderness Road.

In 1910, the State Normal and Industrial School for Women was founded at Radford. In 1924, it was renamed the State Teachers College at Radford. Its main focus at this time was to train teachers for the Appalachian region. In 1943, it was renamed the Women’s Division of the Virginia Polytechnic Institute and State University (Virginia Tech). Radford College became a University in 1979. It is now a State University.

The school currently has about 10,000 students, of which about 45 percent come from southwest Virginia, 40 percent come from other parts of Virginia, and 15 percent come from out of the state. Today, Radford University is a co-educational school primarily focused on business, liberal arts, and sciences. It is one of the Virginia’s 8 doctorate-granting public universities. Undergraduate degrees are offered in more than 100 fields. Among the graduate degrees offered are the M.BA., M.F.A., M.A., M.S., M.S.W., Ed.S., and Psy.D. Specialized doctoral programs are offered in health-related fields.

Dance, music, theater, and other cultural activities are available to the community on the Radford University campus, as well as opportunities to explore our universe at the University’s Planetarium.

Radford has 4 parks for picnicking and recreation. Two of the parks offer access to the New River, which is a beautiful site for boating, kayaking, canoeing, tubing and fishing on clear, gentle water.

The New River flows for some 320 miles through Virginia, North Carolina, and West Virginia. Wade fishing, bank fishing, and boat fishing are popular along the New River.  Muskie and smallmouth bass are among the favorite fish in the river.

Radford has threestops on the Virginia Wildlife and Birding Trail. You might find a unique point of view from the water, as well.

In the Blacksburg-Christiansburg-Radford area, the top employment sectors are government, manufacturing, retail, accommodation and food service, and health care and social assistance.

Top Employers in the education field include

Top employers in manufacturing include:

Most of these manufacturing companies use processes and materials that could, under the right circumstances, be very hazardous to employees and to the community. Negligence could cost lives; mistakes could cause serious injuries to others. If you work for one of these companies and you are 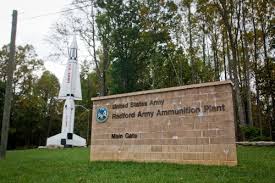 injured on the job due to the negligence or the mistakes of a coworker, your medical expenses and lost wages should be covered by your employer’s insurance company. Should you have difficulties obtaining full and fair compensation for a high-risk manufacturing injury on the job, Altizer Law, P.C. can help you obtain the compensation you are entitled to receive.

Should an industrial accident at a manufacturing plant endanger you, your family, or your home, our legal team can help you obtain just and fair compensation under Virginia law for the hurts and harms you suffer. It is easy to feel that you cannot prevail against a large corporation and their insurance company. Bettina has the experience to take on those who have caused you injury or harm and persist until they win for you the best possible settlement or verdict.

Leading employers in the Health Care and Social Assistance sector include:

Each of these facilities and their respective staff members are trustworthy and they provide high quality care to clients and patients. Unfortunately, however, negligence and accidents can cause harm or death to others. If you or a loved one are injured or harmed due to the mistake or the negligence of a care provider, you may have the right to pursue fair compensation for your harms or losses in the civil courts. Medical malpractice and nursing home abuse or neglect are two of our areas of strength at Altizer Law, P.C. If you believe you or a loved one have been harmed, call us. We will help you evaluate your treatment and determine if you have a legal case. If you do, we will fight for you to obtain the full compensation allowed by Virginia Law.